Addictarium by Nicole D’Settēmi
When creative spirit, and inhabitant of bohemia–Danielle Martino–starts to lose her eyesight from shooting a poisoned bag of heroin, she flees to New York City for surgery, and then to rehab. However, the two-year intensive drug recovery therapy program is more intense than anything she could have anticipated, and Danielle finds herself searching for purpose, sanity, and sobriety in this “addictarium,”–or as she likes to call it; a house of broken souls.

Nicole D’Settēmi is a 34 year old creative writer, poet, and artist from Niagara Falls, New York. Born in a tiny town bordering Canada only five minutes from the legendary falls, Nicole says she had an eye for beauty at a young age, and that included poetry. She can remember from an age as young as six, being selected as part of the city’s “young authors club.” She was interested in lyric poetry from the time she was a pre-teen into her early-to-mid-twenties, and moved into creative writing and fiction in her late twenties and early thirties.

Addictarium was penned while Nicole spent time in an intensive rehabilitation center due to a devastating heroin addiction, and while this is a fictional memoir, many of the themes and tales are based around her own experiences during her two year stay in the notorious Queens, New York “therapeutic community.”

In April of 2010, Nicole lost 95% of her eyesight due to a poisoned bag of heroin she had injected, and was shipped to Manhattan’s Bellevue hospital 1,600 miles away from her city at the time, which was in South Florida, where she had been attending an art institute for photojournalism. She was forced to drop the courses, as she began a new, sober life in New York City.

Nicole was also separated from her fiancé and co-conspirator in 2010, while recuperating in Daytop Village. At that time, she was introduced to her current fiancé, who is also mentioned throughout the novel as the substance abuse counselor she fell in love with.

Today, both artists run a modest business creatively assisting others, and continue to hone their fine arts abilities, in their art studio and living quarters, residing in Pleasant Valley, New York. With their creative assistance-based company; LCDS Creative Services, they’ve dedicated a division to publishing novels, named; The Book House of Seviles. They look forward to venturing further into the writing and publishing world, in 2017. 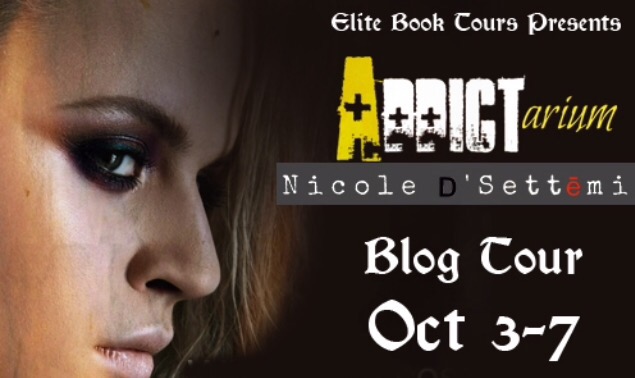 “Come on, Danielle!” Karen shouted over the raging winds, which were both loud and aggressive, due to April’s unpredictable weather. We were scurrying down the wooden planks along the boardwalk, five minutes from our community. Karen, who was drenched in a thick, mauve turtle neck, and a pair of furry, suede boots, ran awkwardly about two feet ahead of me, her left leg shorter than the right making her look funny. She laughed loudly, nearly tumbling over, her voice ringing through the air, despite the howl of the heavy winds. I followed, out of breath, trying to inhale the last of a cheap, fat menthol cigar. Black-and-Mild’s, the box said, and they were delicious. Strong, and intense, scorching the back of my throat, just the way I needed something to be. We continued to run, as we laughed even harder. Tear drops were streaming down my face from my watery eyes, with the sun luminous and bright, but the weather still quite cold, at least for spring.

“I think I see her!” she shouted, referring to our mutual acquaintance August Delgado, who as always, was surrounded by a small cluster of people, all of them off into the distance. They were all people who lived in our Therapeutic Community; a long-term addiction-recovery program, named Safe Haven Village, or The Village as I liked to call it, because Greenwich had nothing on this place, it was a complete circus, a regular freak show by all definitions of the word.

We both squinted to see further, but we didn’t really know what we were seeing. We were higher than one of these New York City skyscrapers, tripping on acid that August had given us. Rockaway beach was five minutes from our community, so we decided to search for our dear friend, sure we had found her, but not so sure it was actually her, given the acid was really starting to kick in. As we neared just a little bit closer, we began to laugh giddily, as we could now see her waving erratically, heading towards us with two black guys, one of her comrades several sizes larger than any of us. We ran fast and furiously towards the rocks they were situated on, screaming and throwing our arms everywhere, as if none of us had seen the other for days on end. She caught up to us, moments later, all of us panting and out of breath, as we hugged one another, laughing gleefully.

“This acid’s pretty wavy dude,” August remarked, her mouth against my ear as she embraced me, “very mellow, it’s like it takes ya on a long car ride into the country, a long car ride with excellent scenery,” she added, as I could feel a slow, lazy smile spreading across her face, and I knew the acid was clearly hitting her as well. I felt her lumpy dreads in my hands, and realized I was still holding onto her. We let go of each other, and we both laughed again.

“What’s the plan for tonight?” she asked us, looking back and forth between the two of us, her lively eyes twinkling with mischief. Oh, Karen and I, we had plans alright. We looked at each other and smiled, but said nothing.

“Okay we’ll leave it at that,” she told us grinning, as the two guys finally caught up to where we were standing. I smiled and said hello, and we all slapped hands.

“We actually have to get ready,” Karen told her, as we lit a couple of cigarettes, and passed them between the five of us.

August slid her hand into her grey hooded jacket, three sizes two big, and pulled out a little piece of plastic cellophane. “Here’s two more,” she said blowing smoke through her nose, and then, finally out of her mouth. She handed me the small packet, and I laid it in my palm, delicately sizing it up.

“You women are crazy, I mean we are in treatment after all,” Stefan, one of the guys, with a crisp, British accent, said. The other guy nodded in agreement, and then laughed, as he watched me eyeball Stefan’s hand, raising an eyebrow. Between his fingers, he held a joint, which I already knew was filled with K-2, a new, hip form of synthetic weed, that no treatment programs were testing for.

“What? This? This is nothing!” Stefan said with a dismissive hand, but even as he said it, he had to laugh at his own audacity.

“They don’t test for acid either,” I pointed out.

His friend shook his head, “yeah, but that shit crazy, yo. Put you straight in the ward!”

“Thanks,” Karen piped in impatiently, “but we have to get ready now.”

When the person purchases Addictarium’s ebook for $4.99 they have a chance to win:

Prize #1 – A subscription from mazagines.com for any 1 selection of reading material they pick (a 1 year subscription)

Prize #2 – A $10 giftcard for Barnes & Nobles, and a signed photo-card of “Addictarium”

Prize #3 – A free ebook of their choice on Kindle (not to exceed $9.99 for the ebook) and a signed/framed photo-card of “Addictarium”

Please email lcdscreativeservices@gmail.com, after the purchase with the email receipt and have a chance to win these amazing prizes.